It was a dreary February day in Edinburgh, and I was catching up with my old friend Debbie, when she suddenly said, “You aren’t seeing anyone right now, are you?”

“Well you know Valentines Day is coming up… there’s a friend of mine I want you to meet, I think you’d really get on!”

“Valentines Day is just overhyped consumerism designed to make people feel bad about being single. But who’s your friend?”

“His name is Tim, and he’s a likeness puppet too, so I just know you’ll get along! We do yoga together every week and he’s really friendly.”

“Okay… but I don’t really think being a likeness puppet is the most interesting thing about me. I’d like to have more in common than that.”

“Just tell me you’ll meet him and give him a chance!”

So that was how I ended up sitting in a nice cafe in Leith over fancy hot chocolates, on Valentines Day. I hadn’t meant to arrange the date for that day, but as it turned out, it was the only afternoon we were both free for a while. He certainly seemed nice enough, pretty cute and clearly fit from all the yoga! But as we got talking, it didn’t seem like romance was in the air. 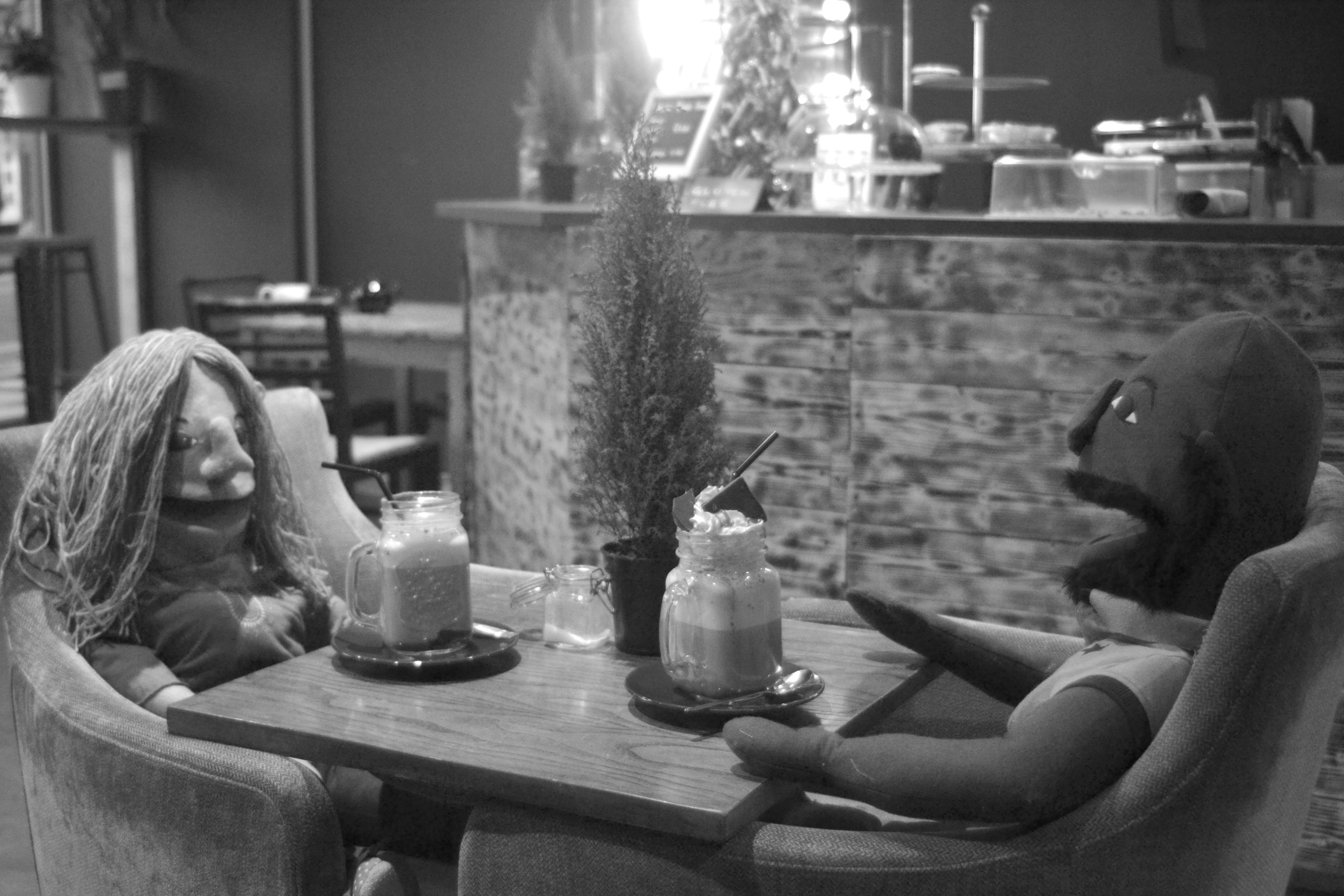 “So, you’re a likeness puppet too?” He said. “Who’s your lookalike person?”

“You know, I don’t really think about her. Sure, I was made to look like some woman named Elizabeth, but that’s not who I am. I go by Liz, I have my own life and interests. Don’t you?”

He looked confused. “No? I’m Tim’s puppet likeness, so I’m just him in puppet form. He does yoga, so I do yoga. This is his favourite place for hot chocolate. I can’t imagine what I would do if I wasn’t Tim.”

I didn’t know what to say. This is honestly why I’ve kind of given up on dating other likeness puppets. So many of them have no personality outside of who they were made to resemble, and that just seems so sad to me. I was willing to give this guy a chance for Debbie’s sake, but it was starting to look like a waste of an afternoon. I sighed and made another effort.

“If you could do anything, not worrying about Tim, what would you do? Anything at all?”

He stared into his whipped cream, stirring idly.

“I dunno…” he said eventually. “I’d kind of like to travel, but Tim is such a homebody. I think we both secretly love the idea of just getting on a plane and going somewhere new, but he’d never actually do that. I couldn’t do that.”

“But why not?” I lit up. “You’re not stuck being as boring as this Tim guy sounds! Where would you go if you could pick anywhere?”

He smiled, almost to himself, and it was the most genuine he had looked since we met. It was pretty cute.

“Italy maybe?” He sounded hesitant, like it might be the wrong answer. “I love the food, and there’s so much cool archaeology…”

“All the Roman ruins, just in the middle of everyday life! Did you know that Rome’s cats have been designated as part of the city’s cultural heritage?”

“Really? That’s awesome!” He was gaining enthusiasm, and his grin was contagious. “I always thought I’d like to have a cat. Tim’s more of a dog person.”

“Not this Tim!” Impulsively, I reached across the table to squeeze his hand. “You are your own person, and I like him.”

So, long story short, we have another date for next week: Roman Holiday and dinner at my place. I think I owe Debbie a thank you! And whether or not you’re a likeness puppet, remember the most attractive thing you can do is to be yourself.

Or, there are more options for custom puppets: